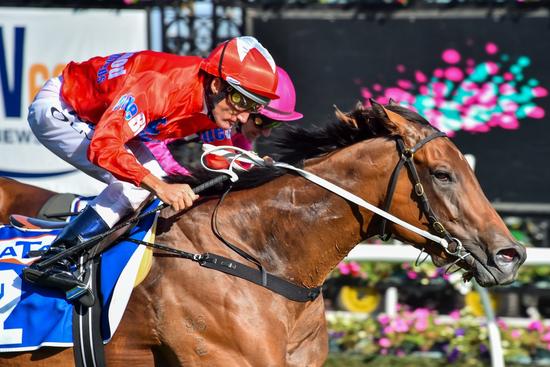 A successful return from Group One-winning mare Secret Agenda in a Listed race at Flemington has added to a big day for trainer Mick Price and jockey Damien Oliver.

Secret Agenda charged late to reel in Tasmanian sprinter I’m Wesley in the ATA/Bob Hoysted Handicap (1000m) on Saturday after Price and Oliver also combined to win the Australian Guineas with Grunt.

Secret Agenda won the Group One Sangster Stakes (1200m) for fillies and mares in Adelaide last May and was fourth in the Group One Goodwood but then missed the spring carnival to recover from inflammation to a tendon sheath.

Price said he considered next week’s Group One Newmarket Handicap for the five-year-old’s return but Oliver recommended Saturday’s race as the better option ahead of the Group One William Reid Stakes at Moonee Valley later this month.

A trip to Sydney is also on the radar before a planned defence of the Adelaide Group One race.

“She’s been fit for a little while and she’s obviously a very good mare,” Price said.

Flemington was in the good range on Saturday but Price is hoping Secret Agenda can strike rain-affected tracks as he described her as a “super wet tracker”.

Secret Agenda settled back in the field before weaving between runners inside the final 200m.

I’m Wesley ($15) had won his past six starts in Tasmania and was gallant in defeat as Secret Agenda ($6.50) lunged late to get home by a short head, with Crystal Dreamer ($4.60) another length away third.

Oliver has won six races on Secret Agenda, including a Group One, and said it was a good effort first-up.

“She wasn’t completely wound up for it but she’s such a dynamic mare and she had the right run and she just pounced at the right time.”