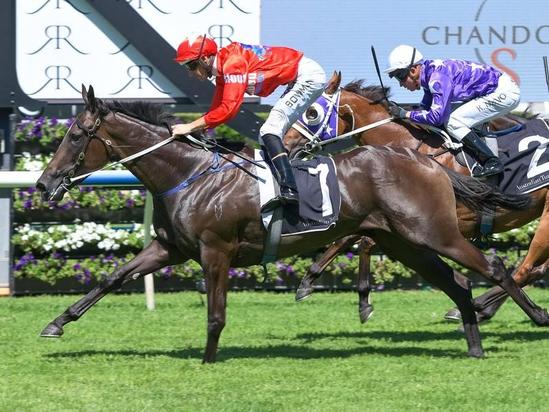 Classy filly Seabrook may have cost herself a prominent placing in the Group 1 Sires’ Produce Stakes at Randwick earlier this month with her curiosity, but her trainer Mick Price believes the filly can make amends in Saturday’s Group 1 Champagne Stakes.

Seabrook was expected to be one of the horses to beat in the Sires’ following her eye-catching run for fifth in the Golden Slipper Stakes last month but she barely got warm after losing her focus before the jump.

“She kangaroo-hopped out of barrier one looking at the starter on his ladder and she was never on the bridle thereafter even though she got beaten a couple of lengths,” Price said on Monday.

“I haven’t been able to fault the horse physically. She’s thrived in Sydney. She’s a sound, tough filly out of a Don Eduardo mare so I think the mile (1600m) will be OK.

“I can’t see that she’s had enough, but she will be spelling after Saturday no matter the result.

“She will be working with Not A Single Cent – Ciaron Maher’s horse – on the course proper there tomorrow over 1000 metres and if she works sub-standard she may go to the paddock, but she’s thriving at this stage.”

Price said he is not totally convinced Holy Snow is a Derby horse but he said he was far from certain that a typical derby horse will win this year’s classic in Queensland in June.

The trainer said Holy Snow, who comes off impressive placings in the Phar Lap Stakes and Carbine Club Stakes in Sydney already this campaign, could head to the Queensland Derby if he runs up to expectations for jockey Mark Zahra in Saturday’s Group 3 Frank Packer Plate over 2000 metres at Randwick on Saturday.

“I don’t think he’s a Derby horse but the Queensland Derby being 2200 metres at Doomben might be up his alley,” Price said.

“Those big, grinding Kiwi staying horses – it may not be the year for that type of horse.

“Blake Shinn’s not riding him on Saturday because he has a prior commitment but he was quite confident the horse can run out a strong 2000 metres so if that’s the case and he does win or run well then he might go to the QTC Derby.”

If Price could train Holy Snow to win a Queensland Derby, it would clinch a triumphant season with his classic males following the Caulfield Guineas win of Mighty Boss in the spring and the Australian Guineas win this autumn of Grunt.

Price said he was unlikely to send his Group 1 winner Secret Agenda to Adelaide this week for the Irwin Stakes with his preference to run her at the Super VOBIS meeting at Caulfield this Saturday.

“Secret Agenda, I want to run her in the Sangster, which is the race she won last year,” he said.

“The Sangster is two weeks from next Saturday so I’m not sure I should be taking her to Adelaide and then bringing her back and then doing it all over again two weeks later so she’ll probably stay and race here and then go over for the $1million race.”