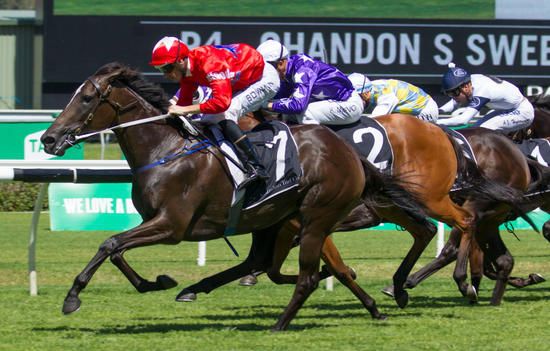 Seabrook shrugged off a hectic schedule and a spate of poor luck to put herself right in the picture for the Golden Slipper Stakes in three weeks after a thrilling win in Saturday’s Sweet Embrace Stakes at Randwick.

For trainer Mick Price, the victory meant he and the owners would not have to suffer a similar fate to what happened to the filly in Melbourne when she missed a start in the Blue Diamond Stakes after being luckless in the Prelude two weeks earlier.

“We’ve pulled something out of the wreck and we’ve got a ticket in,” was Price’s reaction at Flemington after watching his filly storm down the outside in Sydney to grab a late victory over Fiesta.

Price said he was proud of the filly to have overcome a missed run, a trip away to Sydney and an outside draw in the race.

“She had a reverse way gallop on Saturday then a reverse way (on) Tuesday, gets on the float Wednesday night and winds up in a different place then draws out (barriers), comes back (restrained in the race) and produces a long sustained effort to find the line,” he said.

“I thought it was indicative of a good filly.

“She’s a big, strong filly who is training on and she doesn’t suffer from any stress at all. Her temperament is great.”

“I truly believe she will improve a lot with this run,” he said.

“The conditions are quite testing with the strong head wind and moisture in the ground. But she was tough late. She has (Golden) Slipper written all over her. She did it the hard way.”

Price said the win and the certainty of a Slipper start came as a great relief after several weeks of frustration.

“It was good to see what see did as she gives me three weeks (to the Slipper),” Price said. “Three weeks will be beautiful for that filly. She’s qualified and we can breathe a sigh of relief and she’s a Group winner and I think this year’s Golden Slipper looks a bit thin.”