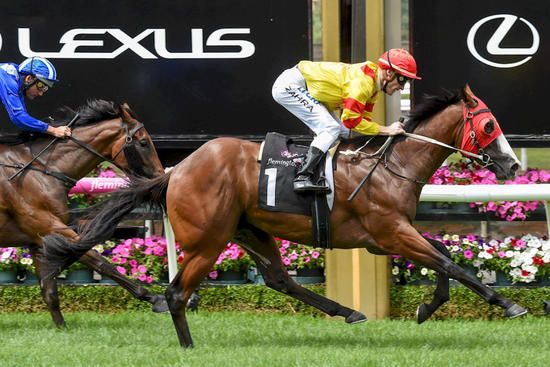 Mick Price’s phone was ringing hot on Saturday afternoon with jockey managers keen to take a booking for the Blue Diamond Stakes (1200m) after progressive colt Prairie Fire secured a start in the Group 1 feature with a strong win in the Asian Executive Stakes (1100m) at Flemington.

Mark Zahra, who is committed to riding Godolphin’s Plague Stone in next week’s juvenile feature at Caulfield, partnered Prairie Fire ($4.40) to a one-length success over Khulaasa ($4.40) in the Listed contest, with a further four lengths back to third placegetter Invincible Lad ($12).

Despite a placing on debut in the Group 3 Chairman’s Stakes (1100m) earlier in the month, Price admitted Saturday’s win came as a welcome surprise and, with the son of Snitzel taking his earnings to $85,000, the trainer confirmed the colt would front up in the Diamond in seven days.

“He raced like a professional today whereas two weeks ago he raced like he had no idea,” Price said.

“He’s improved since (the debut), we haven’t galloped him too hard and he only galloped reasonable so that was a bit of a surprise how well he went then.

“I spoke to Sun Stud before today and they definitely want to run him in the Blue Diamond which is why they ran him here.

“This is basically his gallop to get him to next Saturday, so I just need to give him a soft week and let him get over today.”

While Prairie Fire is assured a Blue Diamond start, Price is sweating on a run with both High Ratio($40,150) and Seabrook ($30,500), the latter of which has excelled since her luckless placing in the Blue Diamond Prelude (1100m) last Saturday.

“Seabrook is thriving so I’m crossing fingers that she’ll get a run.