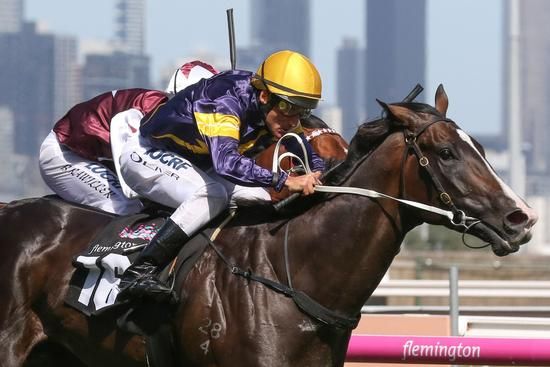 Caulfield trainer Mick Price goes into next month’s $1 million Australian Guineas with three genuine hopes after Grunt confirmed his high rating when he ran away with Saturday’s CS Hayes Stakes at Flemington.

Last week, Price’s Fastnet Rock colt Holy Snow earned a shot at Melbourne’s group 1 autumn classic when he took the Autumn Stakes at Caulfield and just seven days later, Grunt elevated himself into the Guineas field with a commanding win in the Group 3 race.

Backed from $9 to $7, Grunt took a position just off the hot speed and then Damien Oliver produced him inside the final 200 metres as he ran away to win by three-quarters-of-a length from Darren Weir’sbest guineas hope Cliff’s Edge ($6), with a length to Muraaqeb ($9) in third place.

Price confirmed after the race that the Guineas is next for the son of O’Reilly before aiming up at the Rosehill Guineas and possibly ATC Derby in Sydney.

‘’He’s a big Flemington horse and a big striding horse,’’ Price said. ‘’The 1400 (metres) is a bit short for him but that was his run to get him into the Guineas.

‘’He’s a colt. A beautiful O’Reilly colt. A good-winded horse who is perfectly sound and I think that will take a little freshness off him before he goes to the Guineas.’’

The victory in the pivotal race for three-year-olds clearly impressed Price, who earlier claimed he could have three runners in next Saturday’s $1.5 million Blue Diamond Stakes following the victory of Prairie Fire in the opening event.

Price was wary about ranking his Guineas horses but said: ‘’The one advantage he does have – he loves this place Flemington.

‘’Holy Snow will find it different and Mighty Boss will handle it no worries, but it really suits this horse.’’

WATCH: Grunt live up to his name by clicking here: https://www.racing.com/form/2018-02-17/flemington/race/7/results