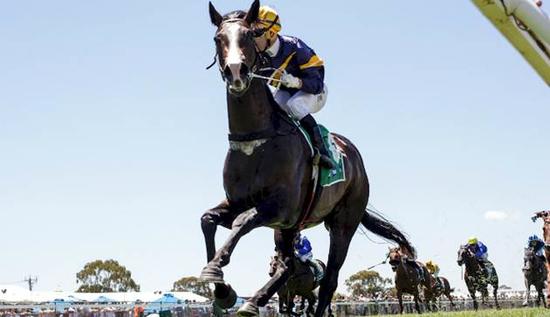 Mick Price might get two chances to add next autumn’s Australian Guineas to this spring’s Caulfield Guineas with the emergence of O’Reilly colt Grunt.

Price sent the three-year-old to Morphettville in Adelaide on Boxing Day for an effortless win as the dominant $1.45 favourite and later said he believed Grunt could make it all the way to Melbourne’s autumn classic in March.

‘’Grunt is a work in progress but is a really good horse,’’ Price said of the colt that has now won three of his four starts.

‘’I think he’s a big Flemington horse. I think he’s possibly an Australian Guineas horse. I can’t wait to get him to 2000 and 2400 (metres) but he is a colt so we’ll try to maximise value on him.

‘’We’ll bring him home, play around with him for a week or two and set him for the Australian Guineas. He’s a really nice colt who can run in the Guineas second-up and then go to Sydney from there.’’

Grunt is the half brother to Jimmy Choux mare Addison, who scored a win at Caulfield just 24 minutes after Grunt cruised home in Adelaide.

As for Price’s Caulfield Guineas winner Mighty Boss, the trainer was upbeat about his chances of scoring a rare Guineas double.

‘’I reckon Mighty Boss has improved,’’ he said. ‘’Mighty Boss was always a bit heavy and not 100 per cent athletic. But he’s totally shown the benefit of last prep.

‘’He was tired but he had five weeks off and he’s thriving at the moment and I think he’s going to be a better horse this prep than he was last prep.’’