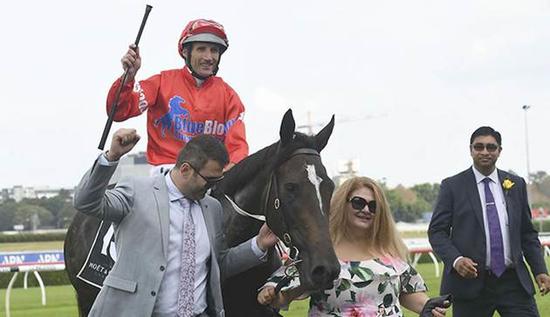 Three weeks after Hiyaam’s G1 Vinery Stud Stakes win, Hinchinbrook filly Seabrook continued a consistent preparation with a performance that proved her scope and talent when she burst through for victory in what Price calls his own ‘best racing season ever’.

“The Blue Diamond and Golden Slipper were the two races we set Seabrook for, after she had to thrive to keep racing, and that’s what she did,” Price explained on Sunday.

“She wasn’t affected by training or racing and each run she had she held her form.

“Rosehill is a good place to train horses, my horses just thrived up there.

“They enjoyed the different weather and there’s beautiful airflow in the boxes at the stables.

“[At Rosehill] they don’t treat their course proper like hallowed ground as some curators do, they help trainers so there’s access to good gallops and good work riders and beautiful stables … Rosehill trainers are very lucky.”

Price acknowledged the success he’s had this season so far and indicated he is counting on it to continue, as he targets the Adelaide and Queensland Carnivals now with a mixture of those deep into their campaigns and fresh horses.

“This season is one of the best racing seasons I’ve had, from a Group 1 perspective,” Price said.

“I’ve had four individual Group 1 winners, two colts and two fillies, and it’s a result of looking after young horses.

“We looked at them as two-year-olds and but put them out and nurtured them, and they’ve repaid us.

“Hiyaam will continue racing in Queensland, she’ll head to the Group 2 The Roses [2000m on May 12] and then to the Queensland Oaks a fortnight later.

“Oregon’s Day is the other who will head to Queensland, she’ll run in the A.D. Hollindale Stakes at Gold Coast on May 5 [1800m Group 2] before the Doomben Cup, she’s a tough mare and she’s thriving so we’ll go out in trip with her.

“Secret Agenda was good in the Irwin Stakes yesterday, she was 29 days between runs off a very soft time after being cooked in the William Reid Stakes [on speed], so she was underdone yesterday.

“Dom Tourneur [who rode Secret Agenda] did say when she hit the front she just lost concentration, which is unusual for her, so I’ll try her in blinkers I think for the UBET Classic [Group 1 on May 5].

“Palazzo Vecchio and the filly who ran third in the ATC Oaks, Miss Admiration, are the two I’m sending to Adelaide for the Australasian Oaks.”