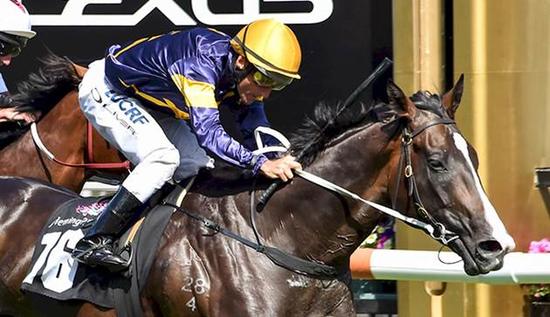 In fact, he can immediately think of two horses with potentially better claims in the race.

“Mighty Boss had Grunt covered in trackwork this morning, which is probably going to be the case on race day [this Saturday],” Price told Racing.com on Tuesday.

“I’d think probably Mighty Boss, then Holy Snow then Grunt if I’m having a long-range guess.

Both Group 1 Guineas winners, Mighty Boss and Grunt have done much of their work together until this point but Price says they are set to split up going forward.

“With Grunt, I don’t really have to be belting up him first-up at 1400m, I would think all we need to do is give him a bit of room … he’ll probably be in the back half of the field and settle and work home,” Price explained.

“I’m not sure he is a Caulfield horse, especially around 1400m.

“Grunt is a big Flemington-type horse so the Makybe Diva and Turnbull Stakes would be the better races for him.

“He has made the most physical improvement, he was an immature three-year-old who has become a four-year-old now.

“Mighty Boss will be a bit more forward, he is fit, although there is still some improvement to come.

“We will probably head to the Memsie Stakes and chase home Vega Magic at start number two for him.

“Mighty Boss is a nice Caulfield horse and might be a Sir Rupert Clarke Stakes and Toorak Handicap horse.”

Price is also set to unveil former Kiwi sprinter Ardrossan in the Regal Roller Stakes on Saturday, but suggests we may see him get over more ground going forward.

“He’ll appear in the blinkers on in the Regal Roller, with Michael Walker to ride,” said Price.

“I’ve got to work him out because initially I thought he might be able to win some of the sprint races with him but I think he may be one of those horses who we get their rating up and go Sir Rupert Clarke and into the Toorak Handicap.

“He’s a big, long-striding horse, he might not put them down as quick as we need to see to win an Australian-sprint Group race.

“All I need to see is that he runs true, he runs straight and doesn’t run like a bull and that he hits the line properly and we can move on from there.”