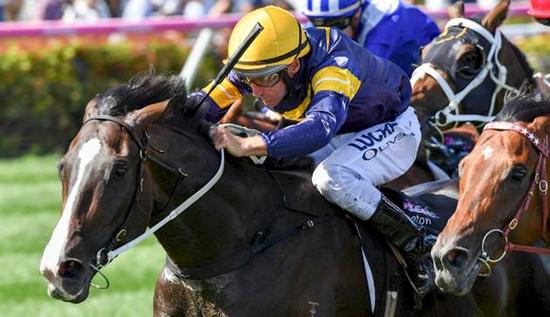 It is still more than a month before Grunt makes his return to the races, but Mick Price can barely wait to see him in action.

The Caulfield trainer could not be happier with the way the soon-to-be four-year-old has flourished since his Australian Guineas win.

Price immediately turned him out after that win, at Flemington on March 3, and said his development since has only confirmed it was the right call.

“Grunt was a lightish Kiwi sort of autumn three-year-old,” Price said. “He had a lovely break after the Australian Guineas, and he’s a magnificent four-year-old now. He’s really improved.

“Physically, he’s made a huge improvement because we were able to give him those eight or nine weeks instead of a short break.”

Price said Grunt, a winner of four of his five starts, was only able to achieve what he did earlier this year because he was ‘a good horse’ and expects him to flourish at four.

Grunt’s physical development only enhances Price’s belief the son of O’Reilly will relish getting out beyond 1600m and said the G2 Lawrence Stakes (August 18) or G1 Memsie Stakes (September 1) – both 1400m weight-for-age events at Caulfield – shape as the launching pad towards potential major glory.

“He’ll be in those weight-for-age 1400s here (at Caulfield),” he said. “We’ll kick off in one of those and then have a weight-for-age program into the Cox Plate (or) Caulfield Cup.”

Grunt is one of two G1 Guineas winners in Price’s stable, which also includes last year’s Caulfield Guineas longshot winner Mighty Boss, who the trainer said would be targeted towards the G1 Toorak Handicap (1600m) on his home track on October 13.

The daughter of High Chaparral spelled in Queensland after her autumn campaign and while she encountered a hoof abscess in Sydney on her way home, she is over that and will return to Caulfield early in the week.

Seabrook is another filly Price is eyeing spring features with and the Champagne Stakes winner relished being given time to mature in the northern states.

“She had a nice little spell at Tim Boland’s in New South Wales in the better weather,” he said.

“She looks fantastic. I reckon if you put a circle around the Thousand Guineas, that’d be the ideal race for her.”