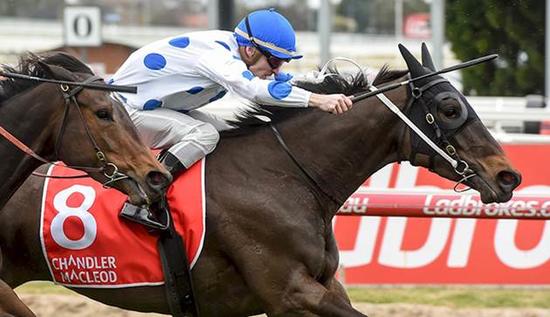 Oregon’s Day will fly the flag for the girls in Saturday’s $1million Memsie Stakes, trainer Mick Price confirming the mare will join Australian Guineas winner Grunt in representing the home-track stable in the Group 1.

Placed at G1 level against her own sex in the Coolmore Classic this year, and a top-five finisher in three other G1s – including against the boys in the Doomben Cup – the Domesday mare will be up against all males in the 1400m weight-for-age feature at Caulfield.

But Price said Oregon’s Day – rated a $21 chance in BetEasy’s all-in market – at least had one thing in her favour, getting the upper hand on stablemate and race rival Grunt ($9) on Tuesday morning.

“Grunt worked with Oregon’s Day this morning on the course proper, Luke Currie came down and rode Grunt,” Price said at the Spring Racing Carnival launch on Tuesday night.

“I don’t think Grunt can win Saturday – and that’ll help him win, the fact I say he can’t win!

“Oregon’s Day worked a bit sharper than him, and I’m going to run her in the Memsie.

“Only because she’s Group 1 placed a couple of times and I need a 1400m race to fit in with her program.

“Michael Dee’s going to ride her, so if she can run a place that’d be great – I don’t expect her to win, and that [jinx] will help her again!”

Mares won eight of 15 Memsie editions from 1998-2013, but it has been the boys’ domain in the four years since, with Dissident, Boban, Black Heart Bart and Vega Magic on the honour roll.

Another of Price’s mares will be eyeing black-type on Saturday, in the shape of four-year-old Miss Admiration in the Listed Heatherlie Handicap (1700m) – and she is one of just three mares nominated to take on the boys.

A resuming third behind Plein Ciel and Yogi over the mile at The Heath, Price was tipping at least bigger things on offer for her and his runners should Saturday not be a winning one.

“I’ve got Miss Admiration going around in the Heatherlie, she’s been Oaks-placed twice, she ran third first up over a mile, it was a great run,” he added.

“There’s a couple there, I don’t know if Saturday will be my day, they’re getting ready for bigger races.”