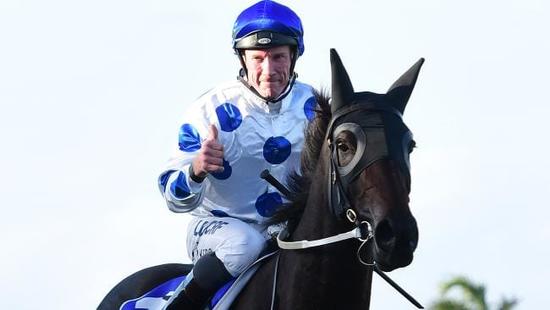 IN a messy running of the Group 2 Hollindale Stakes, Oregon’s Day avoided the scrimmages and emerged a dominant winner to give Jim Byrne his second win in the race at the Gold Coast on Saturday.

Byrne had been working Oregon’s Day for trainer Mick Price over the past fortnight and gained a healthy opinion of the mare.

From those morning sessions, he learned she’s a mare that needs cover in her races and he was desperate to find the right position in running on Saturday.

As it turned out, Oregon’s Day landed in the one-one, as others around him struck trouble or had messy paths, most notably the race favourite Comin’ Through, who was stuck wide throughout.

“I thought it was going to be one of those races where I could get caught on a limb and the most important part was to get cover. If you can switch her off, she’s got that real good turn of foot,” Byrne said.

“Mick has been doing some long staying work with her and it’s helped her relax. It’s hard work on her because you have to go two laps (at trackwork) on her but it has paid dividends.

“Going back through her runs she’d just been that little bit unlucky here and there.

“It’s just that races haven’t been run to suit her and she can get on the bridle a bit.”

With an economical run in transit, Byrne was able to ease out before the turn and give Oregon’s Day a clear path to the line.

“I eased out at the 500m because I knew they would be zipping – they didn’t go that hard early – and I didn’t want to get into a boxing match, I just wanted to give her a nice run into it, just like trackwork and that’s the way it worked out,” he said.

Oregon’s Day was a powerful Group 3 winner over a mile at Moonee Valley in March last year, but Price had resisted the temptation to test her over further – until Saturday.

Stable representative Pat Kearney said Price wanted to give Oregon’s Day time to mature and that’s the reason it had taken until now before going to a middle distance.

Byrne feels the Doomben Cup over an extra 200m will be within her reach, albeit against tougher opposition, with Gailo Chop an expected starter.

“She ran the 1800m out really strong, so I think she’s a definite chance. I liked the last part of her race,” Byrne said, “She has to step up a little bit more, but the formline around her is pretty strong.”

BY THE SUNDAY MAIL