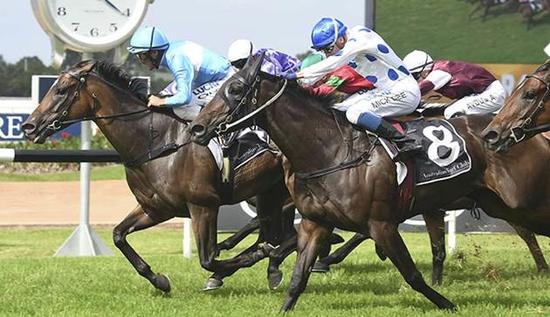 Mick Price is set to saddle a handful of stable stars across Australia this Saturday but is most bullish about Oregon’s Day in the Group 1 Doomben Cup, labelling her ‘hard to beat’.

Price will be trackside at Morphettville with Darley Goodwood contender Secret Agenda, but says Oregon’s Day’s continual progression this campaign has him extremely confident in her chances.

The four-year-old mare has been at the top of her game this preparation, finishing within a length of the winner in three Stakes races and most recently scoring a victory in the G2 Hollindale Stakes at the Gold Coast.

“I think she’ll be hard to beat,” Price said.

“The good part about her win in the Hollindale [last start] is that it was her first try past 1600m, she’s always been a big scopey filly and when we’ve tried to win a Group 1 or 2 with her it’s always been the mile races that have suited her to this point.

“She really thrived in Sydney [before Queensland], she’s had a bit of racing but still thriving, she loves that warmer weather.

“I haven’t seen her for about 10 days but I got a video from the boys up there this morning and she went to the Doomben course proper and ran a mile home two-second lap.

“She was very relaxed and very strong, and showed a good sharp turn of foot.”

The daughter of Domesday is currently on the third line of betting for the Queensland feature and Price explains that while she’s never been tested over 2000m, if she can get a few small favours in the run there is no reason she won’t be in the finish.

“She needs to draw a gate and get cover that filly, if she can’t get cover she gets too aggressive, particularly in a 2000-metre tempo race where they sit up a bit,” added Price.

“I think she’s the one to beat in that race.”

Secret Agenda ran on well to finish second in the Sangster last start so the Caulfield-based trainer is of the opinion she deserves her chance in the race.

“We’ve got a fit horse and she goes into the race at her absolute top,” Price said.

“A little bit of rain would help, it would add lengths to her chances if it was to rain.

“If she was good enough she could win but it’s going to be a pretty good race.”