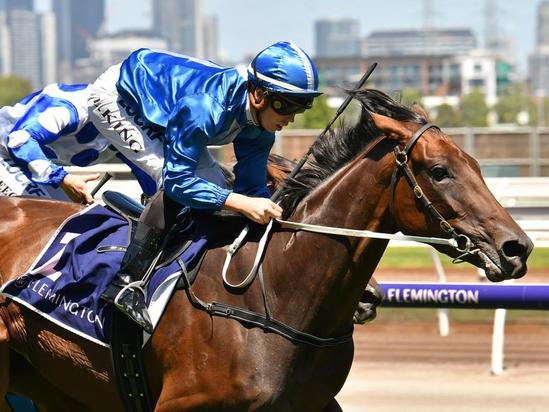 Whichever way he looked at Saturday’s race at Flemington, Mick Price could see problems for his three-year-old Oceanex so the trainer was more than happy after the race to talk-up the Oaks-bound filly after she outgunned the colts at her first try over 2000 metres.

Price had earlier declared he felt Oceanex was an Oaks prospect in Sydney over The Championships in April but was a little cool on her chances on Saturday.

“As I said pre-race, she was up in class, distance, weight and was drawn a gate (11) where she was going to have to give away a fair advantage and she was deep for a fair bit of the trip too,” Price said after the race.

“I thought it was a massive performance to win.”

Punters deserted Oceanex before the race with the daughter of Ocean Park drifting from $3.80 to $6 by the time they jumped. She found a spot wide and just beyond midfield and Price said he liked the way apprentice Lachie King handled himself.

Royal Performance ($3.90) loomed as the winner inside the 200-metre mark but Oceanex found her rhythm out wide and she ran clear to win by three-quarters of a length. The $7 chance Necessitas was two-and-a-quarter lengths away third.

Price admitted Oceanex performed better than he expected given the negatives she faced in the race.

“I thought today was a massive tick for that filly,” he said. “I think it just put her in a category where I’m hoping I can take her to Sydney to run in the Vinery and the ATC Oaks and those races.

“I had my little query today but she still defied all that and came through with flying colours so I thought it was an excellent effort and it gives me a bit of confidence to go and chase those better fillies in Sydney.

“You saw her win at Geelong on the Heavy track. She won by seven (lengths) so in Sydney, hopefully it rains.”

Price said the filly will now have a break and build-up again.

“She’s definitely going out and having a breather,” he said. “I thought I’d take a risk running her but it gives me confidence that 2000 metres is good and she is bred to run 2400 metres.”

** Purchased by Mick Price at 2017 Karaka in New Zealand, we are heading back this week to find another filly like this one! Keep an eye on the results of the NZB sale here, https://www.nzb.co.nz, if you see us purchase one and you want to get involved, please don’t hesitate to contact us..