Noonan Makes Most Of Masculino 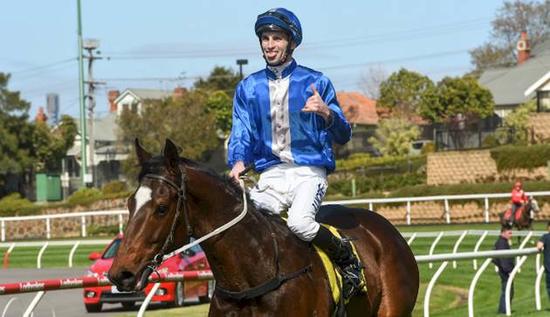 For a rider not guaranteed too many opportunities during the spring, Jake Noonan knew he had to make the most of any metropolitan ride that comes his way.

And that’s exactly what the popular jockey did at The Valley on Saturday when scoring a deserved victoryaboard progressive Mick Price-trained colt Masculino, who will now aim up at next month’s Group 1 Caulfield Guineas (1600m).

Noonan had been aboard the three-year-old at each of his four career starts but was forced to work extra hard to ensure he could ride the galloper at 54 kilograms in what was the biggest test of his career on Saturday.

In the end, he rode at 54.5kg but it didn’t matter as the colt made all in the $120,000 feature over an extended 1500m, holding out the fast-finishing Eshtiraak by a neck, with Sunquest a further two lengths adrift in third.

“Brown rice, asparagus and fish is all I’ve had for the last six nights, with water and a bit of lemon,” Noonan said.

“To be honest, 15 minutes before the race I wasn’t feeling crash hot but I had a good warm up and got the oxygen going.

“This horse is worth it, so I made the effort.”

Noonan is open and frank about his place in the pecking order at Price’s powerful stable but expressed his gratitude towards the trainer, as well as racing manager Luke Wilkinson, for their continued support.

Masculino had shaped as one of his best rides for the spring and Noonan said he was thrilled to reward the faith shown in him by connections.

“Realistically, I’m fighting for rides against Mark Zahra and Damien Oliver who have 20 years of experience on me and look at their CV compared to mine,” he said.

“I probably had one or two horses going into the carnival that I was looking forward to and I wasn’t guaranteed the rides on them and this horse was one of them.

“He’s a progressive colt, everything we’ve done with him, he’s progressed and got better so I was looking forward to him this preparation.”

Price was thrilled for Noonan, who has now ridden the son of Smart Missile to three wins, and predicted the galloper would take further benefit from Saturday’s second-up assignment.

While he went short of declaring Masculino superior to any of his other Guineas-bound gallopers – the trainer has Mighty Boss, Ouyang Feng and Hulme contesting next Saturday’s Exford Plate (1400m) at Flemington – Price said he had always believed the colt would produce his best at a mile.

“I thought he did a good job today, I know the race was decimated with scratchings and it suited us to go to the front but we probably could have gone without Sheer Madness softening him up for a furlong mid race,” Price said.

“There’s improvement to come and I think he’s a big 1600m horse.

“I’m not convinced he’s a Moonee Valley horse but having said that, I think the way into the nicer three-year-old races might be via the Bill Stutt Stakes.”

A start in the Group 2 feature at The Valley on September 29 would set up a likely clash with unbeaten colt Royal Symphony who tuned up for his return to the track with an exhibition gallop between races on Saturday.