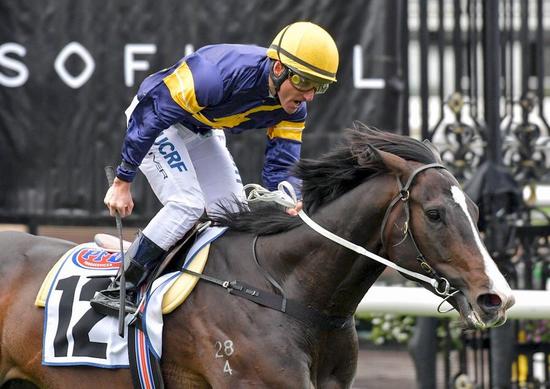 Mick Price has decided Makybe Diva Stakes winner Grunt will not head down a Cups path but instead take on racing’s biggest challenge — Winx in the Cox Plate.

While acknowledging the magnitude of the task he faces in taking on Winx in a Cox Plate, Price said he took inspiration from last year’s race that beating the superstar wasn’t an impossible feat.

“She defeated Humidor by three-quarters of a length last year. We were close-up behind him two starts ago and then we beat him on Saturday comfortably,” Price said.

Grunt is equal second favourite at $15 with Humidor behind Winx at $1.30 for the Cox Plate.

After Grunt won the Makybe Diva Stakes last Saturday, Price indicated that the four-year-old stallion was more likely to target the Caulfield and Melbourne Cups than the Cox Plate.

The next day Price discussed Grunt’s options with his owners and also his regular rider Damien Oliver, and made the decision to stay on a weight-for-age path for the rest of spring.

Grunt will have his next start in the Underwood Stakes (1800m) on September 30 and then run in the Caulfield Stakes (2000m) on October 13, both at Caulfield, before the Cox Plate on October 27.

After that Price plans to run him in the Emirates Stakes (2000m) at Flemington on November 10.

“Damien just made a comment that he didn’t think an 18-horse handicap, charging down the straight at Caulfield in a Caulfield Cup would suit him, and then the Melbourne Cup.

“You’ve got to have a plan and that’s it for the moment but he’ll stay in the Caulfield Cup as a back-up though.”

Price believes not stretching Grunt out in distance this campaign would also benefit his autumn campaign.

Price said another consideration was that if Grunt could win a Cox Plate it would inflate his value as a stallion prospect.

Meanwhile, Price has strong claims of adding another Group 1 this Saturday.

Price will have Seabrook run in the Golden Rose Stakes (1400m) at Randwick.

He will also have dual representation in the Sir Rupert Clarke Stakes (1400m) at Caulfield with Oregon’s Day and Holy Snow.

Price said Seabrook’s work on Saturday at Caulfield was “super” and Damien Oliver will ride her in Sydney.

“Oregon’s Day’s last start was great in the Memsie Stakes and Holy Snow trialled well this morning in a hot trial and got his ticket back to run in it.”

Michael Dee will ride Oregon’s Day and Holy Snow will be ridden by Chris Farnham.