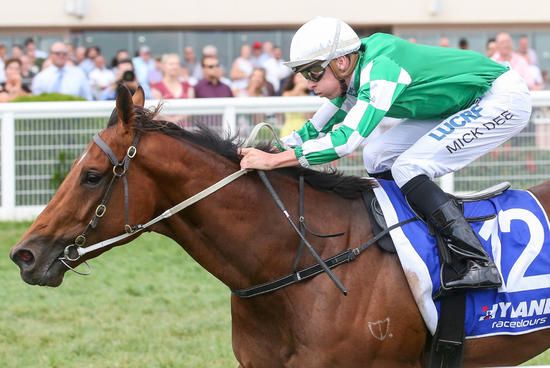 The Mick Price-trained Holy Snow has enhanced his Australian Guineas credentials with a strong win in a key lead-up race at Caulfield.

Holy Snow ($16) charged home down the outside from last in his return from a spell in Saturday’s Group Two Autumn Stakes for three-year-olds to win the 1400m race by 1-1/4 lengths.

After the win Holy Snow’s quote for the Group One Australian Guineas (1600m) at Flemington in three weeks was wound in from $51 to $11.

Mr So And So also ran home strongly from back in the field for second and firmed from $26 to $15 for the Guineas while Astoria filled the minor placing, another 1-1/4 lengths away.

Holy Snow was placed in the Bill Stutt Stakes last spring and Price felt the colt’s unplaced Caulfield Guineas run, when finishing ninth to stablemate Mighty Boss, indicated he had trained off by that stage.

Price said they had had to spend longer than he would have liked last year getting the horse a barrier certificate because of his behaviour in the gates.

“We’ve had a reasonable opinion of him but we’ve had to sort of fight him a bit,” Price said.

“But the thing I’ll say is he’s over his delinquent ways and he’s a much better horse physically and a much stronger horse.

“So onwards and upwards into the Australian Guineas.”

Price said he had planned for Holy Snow to go to the Australian Guineas at his second run of the campaign.

“That’s some sort of Australian Guineas form line there, so hopefully he can do that on the big Flemington track,” he said.

The Price-trained Caulfield Guineas winner Mighty Boss tightened from $11 to $9 for the Guineas after his luckless seventh in Saturday’s Group One C F Orr Stakes.