Hiyaam Runs Away With Group One Vinery 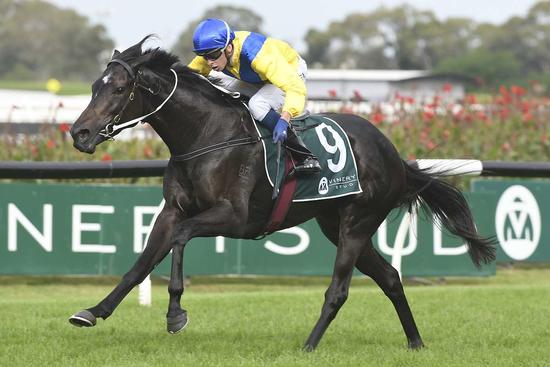 High Chaparral filly Hiyaam is on course to improve on her debut Oaks mission in the spring after running clear to thrash fellow staying fillies in Saturday’s group 1 Vinery Stud Stakes over 2000 metres at Rosehill.

Last spring, Hiyaam finished third in the VRC Oaks at just her fifth start but is now among the favourites for the April 14 $1 million ATC Oaks after finding her best form under Michael Dee on Saturday.

‘’She ran well in the VRC Oaks last year and it’s always been the goal to get to the ATC Oaks,’’ trainer Mick Price said. ‘’This is a little cherry on top.’’

Hiyaam started at $13 and after bursting clear at the top of the straight, had a length and three quarter margin over the favourite Unforgotten ($3.60) with two and a quarter lengths to Aloisia ($5) in third place.

Price paid tribute to jockey Michael Dee’s handling of the filly, who wears the yellow with the royal blue V and cap of owner Sheikh Mohammed Bin Khalifa Al Maktoum.

‘’Fantastic ride,’’ he said. ‘’They left her alone. He said he was going to roll forward and if something attacked her he would take a sit but they just left him alone and he just travelled.

‘’She’s got a great heart and lung this filly so it’s a good spot to be in because we know she is going to be strong to the line.”

The former New Zealand rider Dee however was quick to praise the horse. ‘’Credit to the filly. Last prep I was riding her a bit too pretty. Today there was no speed in the race so from the one pole we just elected to roll forward and dictate terms. She was way too good in the end.’’

The Vinery Stud Stakes is now among Dee’s favourite race victories. ‘’This is right up there, it’s my third Group 1 now but that’s my favourite one winning for my old boss and master Mick Price.

‘’He’s given me a lot of support since I came over here so big thanks to him.’’

Dee said he had no doubts about an Oaks trip for his filly. ‘’No worries at all. Even after the line. I was still humming down the side.

‘’Bring on the Oaks. If she can get the run lead and run in the Oaks she will be hard to beat that is for sure.’’

Kerrin McEvoy said the runner-up Unforgotten would have her chance for revenge in the Oaks in two weeks.

‘’It was a huge run,’’ he said. ‘’We just got shuffled back about the 1000 metres. Had to make a widish run into it but hit the line full of running. Made a good attempt to try to run down the leader but it had too much break on me.

Mark Zahra was delighted with the improved performance for third of Thousand Guineas winner Aloisia: ‘’She ran super,’’ he said.

’Just didn’t want to go back to last – she’s been doing that too much so we took up a spot, she was wide all the way and ran super.