Hiyaam And Dee Chase Another G1 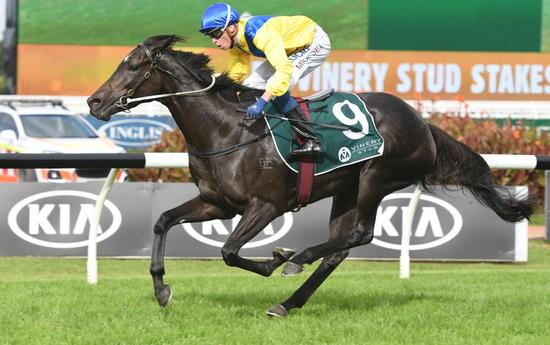 As impressive as Hiyaam was in her front-running Vinery Stud Stakes win, it was what happened after the finish line which has buoyed jockey Michael Dee’s hopes the filly can also win the Australian Oaks.

Hiyaam, who was third in the VRC Oaks in Melbournelast spring, stamped her credentials for Saturday’s Australian Oaks (2400m) at Randwick when she led all the way in the Group One Vinery (2000m) at Rosehill on March 31.

The Mick Price-trained filly beat a group of other Oaks hopefuls in the 1-3/4-length victory, giving 21-year-old Dee his third Group One win for the season.

“The most impressive part was after the line,” Dee said.
“She dominated that race to win by nearly two lengths and then it took me 1200 metres to pull her up.

“And I know she gets the distance. The 2400 metres is no worries so she should be going pretty close.”

Hiyaam will jump from the inside gate in the field of 13, having also jumped from barrier one in the Vinery.

The filly went into the Vinery off only one lead-up race when third in the Group Two Phar Lap Stakes (1500m).

“I knew she would run well in the Vinery but to win like she did was a bit surprising,” Dee said.

“I think this time in she’s gone to another level.”

Hiyaam forms part of a good book of feature race rides on the second day of The Championships for Dee who is having a break-out season at the elite level.

He also partners Hiyaam’s stablemate Oregon’s Day in the Group One Coolmore Legacy Stakes (1600m) for fillies and mares.

Oregon’s Day has been knocking on the door having finished a close second in all three starts at Group level this campaign, including the Group One Coolmore Classic two starts ago.

Five To Midnight is trained by Lisa Latta for whom Dee rode winners when he was an apprentice in his native New Zealand before moving to Melbourne in early 2015.