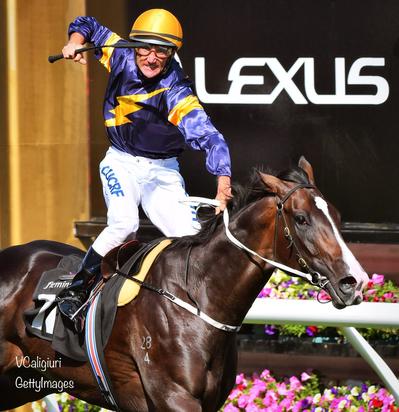 Mick Price on Saturday completed the rare double of the spring and autumn Guineas in Melbourne but the Caulfield trainer has eyes on an even bigger prize for the Australian Guineas winner Grunt.

Grunt powered home under Damien Oliver at $5.50 to win Saturday’s $1 million classic but while Price was adamant the son of O’Reilly was going to be even better over longer, he said the lure of the spring’s big races tempered his ambitions for a Rosehill Guineas title in Sydney later this month.

Price said his spring targets with Grunt were lofty.

“Hopefully he’s a Cox Plate horse that can get around Moonee Valley or maybe a Caulfield Cup horse,” he said.

With that in mind, Price is wary about going to the well too often with the horse as a three-year-old.

“The only race I’d go forward to is the Rosehill Guineas over 2000 metres but I am mindful that he’s going to be a really, really good four-year-old and it wouldn’t worry if I had to put him out,” Price said.

“His job is sort of done now. I’ve used a bit of petrol on him. He’s not light but he’s not furnished yet. I don’t know if he’s got a trip to Sydney or not in him.”

Last spring, Mighty Boss took the Caulfield Guineas for Price at $101, but five months later Grunt was just a fraction of those odds as he lived up to his pre-race hype following three lead-up wins in a row.

Grunt benefitted from a super ride from Oliver. Faced with barrier 17, Oliver decided to press forward rather than ride him back for luck and he found a good position on settling in sixth spot.

The pace was hot up in front with $4.60 favourite Cliff’s Edge bursting clear on straightening for home, but he was spent with 100 metres to go and was swamped with Grunt prevailing over Peaceful State ($8.50) by half a length with filly Bring Me Roses ($21) a length-and-a-half away third. Cliff’s Edge faded to finish seventh.

“I thought he was in a good spot but he still had to tough it out,” Price said. “How he won is the horse he is. He’s just a beautiful, big Flemington horse with a really good set of lungs on him.”

With the victory, Price joined Hall Of Fame trainers Colin Hayes and Lee Freedman as a three-time winner of the Guineas but Price said Grunt was a different horse to his other winners Light Fantastic (2008) and Heart Of Dreams (2009).

“The other two were 1600-metre horses but this horse has 2000 metres in him no question,” he said. “He might have a mile-and-a-half. He might have two miles I’m not sure but he’s just a big clean-winded really big colt.”

Price’s future this autumn at Group 1 level does not rest solely with his well-performed three-year-old team.

Seabrook took Saturday’s Sweet Embrace Stakes at Randwick and now shapes as a genuine Golden Slipper Stakes chance later this month while the mare Secret Agenda has any number of G1 options in front of her after her first-up Hoysted Stakes win at Flemington.

Secret Agenda, who is already a G1 winner of the Robert Sangster Stakes in Adelaide last season, will run next in the William Reid Stakes at Moonee Valley before she goes to Sydney for a possible tilt at the T.J. Smith Stakes and then a return to Adelaide in May to defend her Sangster title.