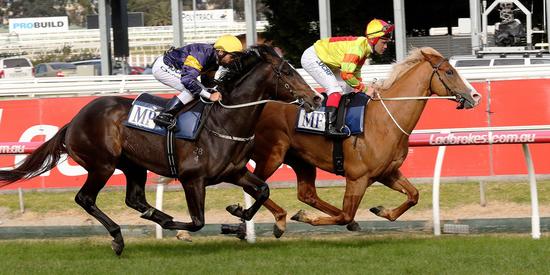 Mick Price has often stressed that his group 1 Guineas winners Mighty Boss and Grunt are vastly different types of horses and so it appeared when the pair galloped between races at Caulfield on Saturday.

Mighty Boss, who won the Caulfield Guineas at $101, immediately took the eye as the flashy chestnut walked around the mounting yard for jockey Michael Walker and again on the track when he proved far too sharp for his Australian Guineas winning stable mate.

Mighty Boss led up under restraint from Walker but Damien Oliver aboard Grunt was constantly at his horse to bridge the gap and it was a task beyond the son of O’Reilly.

“The chestnut is way more forward fitness wise,” Price later explained of Mighty Boss. “Grunt is a different horse – he’s a mile to 2000 metres and the other horse has won over the shorter course.

“But I am happy with both. They will both go to the official trials on the 6th of August at Cranbourne before they both probably kick off in the P B Lawrence (Caulfield on August 18).”

Price said while he will train Grunt for the Cox Plate, he wasn’t certain as to Mighty Boss’ main mission this spring.

“I thought I needed to have the chestnut horse more forward for the shorter races like the Toorak and those sort of races so I thought I’d have him a bit sharper,” he said.

“But Walker has been in my ear about how he thinks he’ll be a fantastic 2000 metre horse. He’s been yap, yap, yapping about that.

“He’d be an ideal Underwood (1800m) horse too. He had a bit of a sore joint after the Australian Guineas but he’s had a good break and he’s fit and fresh.

“Grunt’s a real Flemington horse, but I’ll try to win a Cox Plate.”