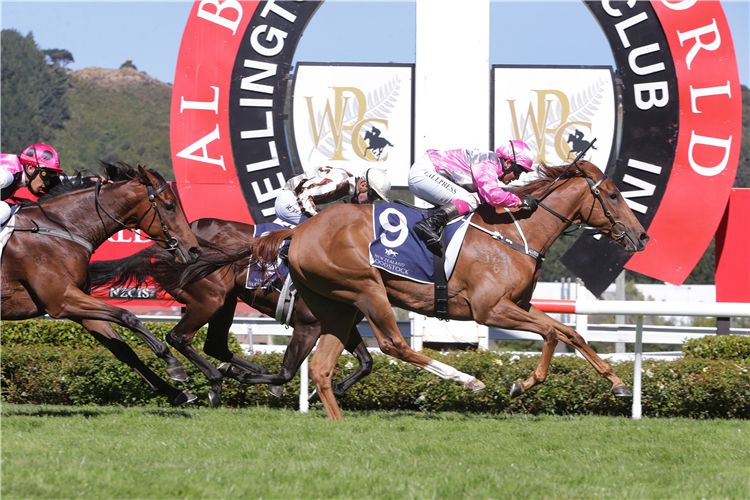 Gold Bracelet, one of the most progressive fillies in New Zealand, is bound for Victoria.

Roll The Dice Racing has acquired a 50 percent share in the daughter of Pins, who will next month take up residence with Mick Price and Mick Kent Jr at Caulfield.

The three-year-old has had four starts for three wins, including a last-start victory in the Group 2 Wellington Guineas (1400m) in March.

Steve Travaglia from Roll The Dice Racing said buying into Stakes-performed fillies from New Zealand was a new play for his team and considered Gold Bracelet the ideal horse to dip their toe in the water with.

“She’s a Group 2 winner already, has good residual value and can only add to that over here,” Travaglia said.

“Mick Kent Jr is really good friends with (bloodstock agent) Phil Cataldo and she is one he recommended.

“She’s got much upside. She’s only doing what she needs to do and once the penny drops completely, Phil reckons she’ll be a high-class filly over here.”

Gold Bracelet was trained by Johno Benner and Hollie Wynyard in New Zealand and carried the colours of Jen Campin Bloodstock, which retains a 50 percent share. She will race in colours that are a mixture of the well-known Roll The Dice design and Campin’s pink and silver.

Gold Bracelet has commenced pre-training in New Zealand and is tentatively booked to come to Australia on July 4 with the Group 1 Empire Rose Stakes (1600m) at Flemington on October 31 the early aim.

“I’ve been friends with Jen Campin for many years now and it’s fantastic to be able to train a really nice filly for her and to combine the ownership with our great clients Roll The Dice. I really do think we’re going to have a lot of fun this spring,” Kent Jr said.

“We are thrilled to get such a highly-talented filly who still looks to be on the up into our stable. She is already in pre-training in Cambridge and we have put a circle around the Empire Rose on Derby Day as a race we’d like to target.

“She lands here in a few weeks and everyone involved is very excited.”