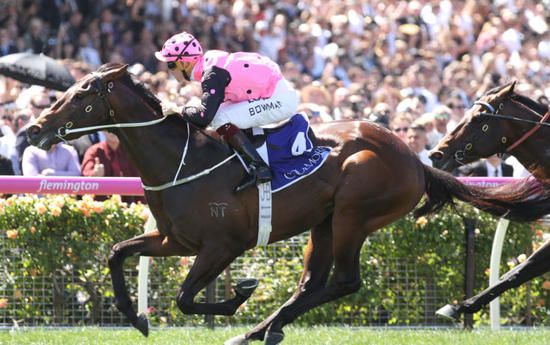 Flying Artie had to wait his turn but the colt is now a Group I winner after Saturday’s Coolmore Stud Stakes (1200m) at Flemington.

Flying Artie played the support role to his stablemate Extreme Choice in the Blue Diamond Stakes in February while he chased home Capitalist in the Golden Slipper in March.

Injury forced the son of Artie Schiller to make a delayed return to racing in the spring while Extreme Choice pocketed another Group I win in the Moir Stakes (1000m) in September.

Flying Artie scored a solid win in the Group III Blue Sapphire Stakes (1200m) at Caulfield first-up but started at $10 against Extreme Choice, Star Turn, Russian Revolution and Astern in the $500,000 contest.

The Mick Price-trained galloper drew barrier one but the trainer lauded jockey Hugh Bowman’s handling of the three-year-old after the rider was able to ease him across the track in the first 800m.

Flying Artie sprinted powerfully in the last 250m to beat Astern by 1 ¼ lengths while Star Turn led the field until the 150m before sticking on for third, a short half head behind Astern.

“For him to draw barrier one and make one of those Hughie Bowman mid-race decisions, to get in the fat part of the race where Russian Revolution and Astern was, was probably what won the race,” Price said.

“But he’s got to have the horse under him He’s always been a good horse and he’s had his excuses, especially in the Blue Diamond, but today just franks him as a stud colt and I couldn’t be happier.”

Price said earlier in the week he would consider backing up Flying Artie in next Saturday’s Darley Classic (1200m) but Saturday’s Group I win could change his thinking.

“He’s got a great autumn in front of him.” Price Said