Code Cracks It For ATB And Price 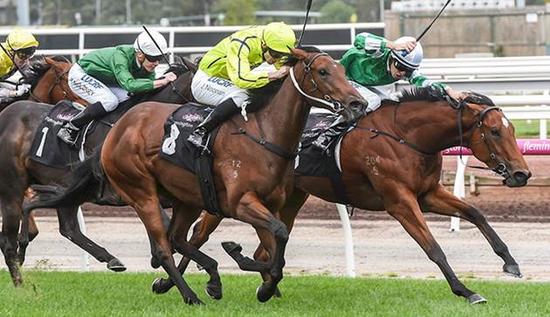 Prominent syndicator Darren Dance is a man of his word, as Crack The Code proved in the $100,000 Graham Salisbury Plate that launched Saturday’s Living Legends Raceday at Flemington.

The daughter of I Am Invincible is the first Mick Price-trained horse to carry Dance’s fluorescent yellow Australian Thoroughbred Bloodstock colours.

The $170,000 Magic Millions purchase carried them with distinction, too, finishing too powerfully for her rivals in the 1100-metre event at her first raceday appearance.

“I’ve been talking to Mick off and on for years about racing and horses and I said to him, ‘When I send you one, it’ll be a good one so you’re just going to have to wait’,” Dance said.

“Thankfully, I spotted this filly up at the Gold Coast last year. She’s out of a Group 1-winning mare (Most Secret) and is just a lovely filly and just had such a good temperament. She just walked around the sales like she’d been there all her life.

“I probably had to go a little bit more than I wanted to, but that’s what happens if you want them and she’s delivered today.”

Crack The Code ($6.50) unleashed a strong finish under the urgings of Jake Noonan to nab Yulong Mercury ($8) in the final stride for a half-head win. Third, one-and-a-quarter lengths back, was Graceful Storm ($5), one length in advance of $4.60 favourite Aristia.

“Mick said if she handled the straight she’d be hard to beat, but you just never know at Flemington the first time,” Dance said.

“I was really impressed with the way she travelled and finished off and I don’t think the young fella (Noonan) could have ridden her any better.”