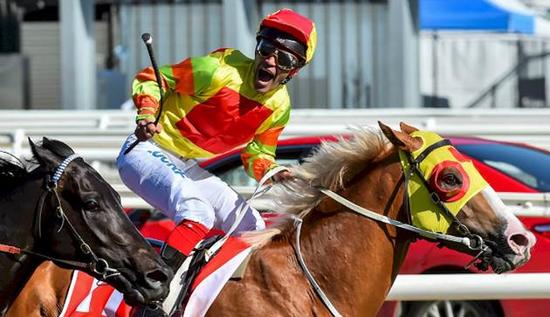 Racing is a game of high emotions – and winning, especially when it’s not expected, is about as good as it gets.

Trainer Mick Price summed up his Caulfield Guineas win pretty well. Silent throughout the race for the most part as he watched from the weighing area, Price unleashed just one ‘Go Mighty Boss!’ when he was about to hit the front, and before he even crossed the winning line, launched his racebook towards the TV in glee.

It was raw, and it was priceless, from – generally speaking – one of the more measured horse trainers in the land.

Mighty Boss started 100-1, and beat the star colts, and the star filly.

The Lindsay Park crew, and several others nearby, were the first with congratulatory handshakes – despite the obvious disappointment of seeing their star Catchy beaten.

And, ever the gentleman, Price went and collected his racebook – maybe out of necessity for the remainder of the workday rather than cleaning up – before scooting out to celebrate his first-ever home-track Guineas.

It comes a year after the Price stable had two star colts in work – Extreme Choice and Flying Artie – and promptly won a Blue Diamond, a Coolmore Stud and a Moir Stakes with the pair of them before they were shipped to stud.

But who knew just around the corner, the Not A Single Doubt colt – who was first emergency, and only guaranteed a run when Summer Passage was scratched on Thursday – would put Price’s name in lights soon after.

Winning the stallion-making Guineas is massive, and finally Price’s luck in the race turned on the back of a beaut rails ride by Michael Walker.

“I think we’ve run placings in this race over the years, but it is a Caulfield Guineas,” Price said.

“You do need luck in the race, and I thought it was a pretty strong race, and he was lucky he did get a run.

Walker said he had been in Price’s ear for some good rides over the Spring Carnival, after winning the UCI Stakes on Main Stage for Trent Busuttin and Natalie Young.

“I said to Mick when I won on Main Stage, I said, ‘Any chance of putting me on a good one?'” Walker said.

“I said, ‘Don’t worry, I’ll still be there [at Caulfield] every Tuesday to get rides’.

It was Walker’s first Group 1 since this raceday two years ago when he rode Criterion to a dominant Caulfield Stakes success.

And it was due reward for the injury-prone Kiwi.

“Last three years, I’ve been six months on, two months off,” he said.

“I’ve had operation after operation.

“My weight’s got out of control when that’s happened.

“I know I keep saying it, but I’m pretty strong the way I feel at the moment.